[Repost of an entry in my dramaturgy blog on the Philadelphia Dramatists Center web site.  Original: http://www.pdc1.org/viewthisblog.php?post=72] “Serendipitous Acts of Fate and Community”: A report of an event, a publication, a […]

[Repost of an entry in my dramaturgy blog on the Philadelphia Dramatists Center web site.  Original: http://www.pdc1.org/viewthisblog.php?post=72]

“Serendipitous Acts of Fate and Community”: A report of an event, a publication, a state of the state, and a call to action.
By Martha Steketee

On Tuesday, February 16, 2010, in the historic Plays & Players main stage theatre space, the Philadelphia New Play Initiative and Philadelphia playwrights and other theatre professionals welcomed Todd London, one of the authors of the December 2009 TDF publication Outrageous Fortune: The Life and Times of the New American Play.  These initial reflections are offered as a starting point for my own synthesis of this event and this report.  My own professional perspective is as a reader for several literary departments in large theatres in several American cities, and as dramaturg on productions, readings, and informal arrangements with playwrights and their new works.  My love for new work is personal and deep. From the report and the presentation I wanted truth and I wanted some hope.  And I believe I received a bit of both. 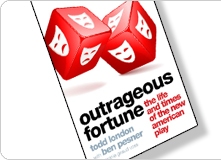 This multi-year study report has now engendered pages of press on theatre websites including those dedicated to playwrights, dramaturgs, new play development, and theatre criticism generally. Whether this initial splash of attention will yield an enduring interest, debate, analysis remains to be seen.  This snowy Philadelphia evening the themes and findings were front and center at Plays & Players. London appeared in Philadelphia as part of a multi-month whistle stop tour of similar theatre community conversations about the report.

The study presents and analyzes survey and interview and focus group results/findings/themes from the perspectives of established playwrights and from the theatre institutions that produce and that don’t produce their work.  In London’s words in Philadelphia: this study on new play development

“wanted to find out where the blockage was”.

I will let the report speak for itself with some quotations.  In general these comments are the words of others, the study participants, who responded to surveys and participated in interviews and group discussions.  Hopefully these snippets will lure you into reading the report as a whole.

I purchased the book as soon as press began appearing in theater blogs and discussion lists and Facebook status updates, and have been consuming it in bits and pieces since.  When I compared notes with several folks at the Philly event, they reported the same slow wade into the work.  London noted this attribute of the report’s content and structure — report is intended to acknowledge the dense reality, this perspective divide, these institutional barriers.  The report is intended also to agitate and to provoke conversations about the experience of new play development for theatres, for playwrights, for literary managers and artistic directors. The writing is clear and inviting – it’s the content that challenges.  It gives voice to our individual concerns and calls us out on our biases and misconceptions of process and fellow professionals.  The findings of the report can be boiled down to simple long understood lessons such as organizations (and theatre literary departments and artistic directors)  and individuals (playwrights) have different perspectives and needs. And the findings of the report can be as complex as the nature of art itself and its essential social role.

It took me a cross-country plane flight to dig into this publication in earnest.  My advice is to take an hour, close off other distractions, get yourself a nice beverage of your choice, and dig in.  The findings are timely, the conversation is important, and the lessons are essential to what we all care about: the life and times of the new American play.  Jump in.