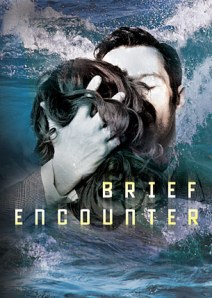 Adaptor/director Emma Rice has created a new assemblage out of Noël Coward’s one act play Still Life, adapted to film in 1946 as Brief Encounter by David Lean.  Rice has filmed sequences with her stage actors evoking scenes from Lean’s film and interspersed those bits with a newly assembled vaudeville of a play combining elements of stage and screen.  This new creation appears to be strongly influenced by the walking-into-a-movie-screen conceit of Purple Rose of Cairo and Edward Hopper‘s 1939 painting New York Movie — equal parts film noir, people on scooters evoking easy laughs,  puppetry, scrims and projections, and a script written of pre-war, imminent war, middle class Britain.  Trains and movies.  Magic made of theatre moments.  And Hopper in two dimensions is more evocative of mood and lasting in memory than this play in three.

Laura (Hannah Yelland) married to Albert (Joseph Alessi) travels into town via train for weekly shopping excursions.  We don’t know if she is unhappy in her married life, but we later learn she has two young children (portrayed quite movingly by child life-sized puppets, manipulated by the human actor parents).  On one of these excursions she meets Alec (Tristan Sturrock) in a train station tea room, where he removes a cinder from her eye, evoking images of the fairy tales the director/adaptor wants us to ponder and consider as influencing this story.  Around this set of middle class characters swirl two additional couples, the women who work in the tea room and their suitors.  Songs are sun, images evokes, portraits painted of home life (Laura’s), station life (everyone elses) and life in transition.

The first moments of the show, prior to any of Coward’s words being uttered, several actors and the two women we later meet as tea room employees, sing to us as ushers in our theatre, setting the stage of theatre as movie palace as “we are there”.  Laura and Alec in character have an angry interaction up from the audience, and one of them walks up on the stage up into a several story scrim (cut in vertical swaths) onto which a moving image is projected.  And we’re off.  A second riveting stage image is created later in the play, when the train that is carrying Alec away is portrayed by a scrim curtain pulled across the stage with projected image of life-sized train, timed to the curtain pulled by running actor — train running across the stage.  Sound (by Simon Baker), projections (Jon Driscoll & Gemma Carrington), all amazing.

And then, in the next beat, you think rather than feel through these moments.  Coward’s original straightforward impossible conventional-lives story of an affair between people married to others is deconstructed almost beyond recognition.  For my money the lasting effect is gossamer wings when it could be human reflections, but this is to my personal taste.  Sensations are felt but they are superficial and shattered across screens, across scrims, up scaffolding, through puppet children.  Music evokes memories of eras gone by (was that Benny Goodman at Carnegie Hall during one moment of house music?).  And the actors walk off the stage into the inner lobby, singing vaudeville songs, inviting you to join in the entertainment.  And I say: the Hopper usherette solemnly pondering something mysterious and quiet and within herself is more powerful and lasting than this temporarily engaging entertainment.