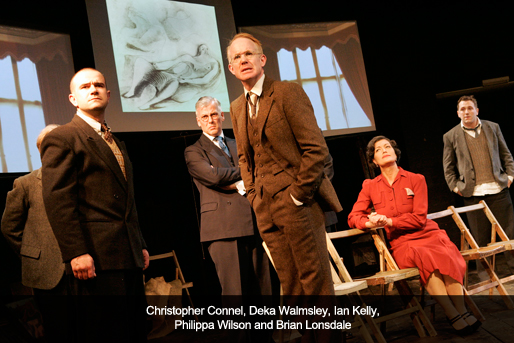 Hardworking miners take advantage of community resources to improve their minds and find their voices through art.  Or: the wisdom of the common man enjoys a brief flowering before the communist fearing Red-baiting 1950s fully engaged.  Settle into a slide show and a history lesson, with little world context.  The Pitmen Painters provides story telling with effective multi-screen projections and simplistic stage pictures, some fine performances, and glaring gaps in intellectual context.

Oliver (Christopher Connel), Harry (Michael Hodgson), George (Deka Walmsley), Jimmy (David Whitaker), along with an otherwise nameless “Lad” (Brian Lonsdale) are miners and other community members in New Castle who take an art appreciation class with a young instructor Robert Lyon (Ian Kelly) who helps the unschooled but gentlemanly miners move from “we just want to look at a picture and know what it means” to “the point of a painting is how it makes you feel.”  They learn through doing, create some earnest and appealing artworks, along the way attract the interest of a local art patron Helen Sutherland (Phillippa Wilson) and use the services of an artist’s model Susan (Lisa McGrillis).  The story takes us from 1934 when the group first meets through 1947 when the group faces a post World War II period of hope for a communal / socialist future replete with nationalized mining, health provision and, they hope, a great deal more.  Projections report the political realities through the 20th century that dash many of these dreams.

The glaring omission (dramaturgically speaking) of the efforts supported by the Works Progress Administration (renamed Work Projects Administration in 1939) during these same years that gave voice to otherwise unheard artists challenges the pronouncements at several points of this play that these miners and their artistic expressions are unique in the history of the western world.  No not true.  Other dramaturgically challenging moments center on music choices.  Pleasant, yes, to have music to balance the multiple uses of effective light,crash, flash crunch transitions that suggest the otherworldly experience of the mines or a train station.  But the music choices at times seem out of synch with the timeline as provided by the playwright in his linear group story telling.  For example, between two scenes that take place in the mid 1930s we have Al Jolson‘s version of “Mammy”, that would have been out at this point almost 10 years.  Similarly odd (or unexplained to these American ears) is what appeared to be a Gaelic version of “Happy Days are Here Again” between scenes set in 1939.  The song was copyrighted in 1929, used in a 1930 movie, was the election campaign tune for FDR’s first term in 1932.  At minimum, the timing seems off.

This is a pleasantly presented history lesson, with effective stage moments and painting projections.  Think of the on-line content accessible for the National Gallery of Art in London or in The National Gallery of Art in Washington DC — with the ability to zoom in on painting details — and you’ll have a sense of the projection style.  William Feaver, who wrote the book that is the basis of this play, notes in  the playbill:

“It’s often said that the play’s the thing. Here though, projected above the heads of the actors — demonstrating once again that art making is art appreciation and art appreciation is also a zest for life — pictures, really are the thing.”

Yes, many moments involving projections and closeups and crafting of and commenting on the pieces of art themselves are the strengths of this piece of theatre.  On the other hand, speechifying and proselytizing and semi-circular group formations and character pronouncements with little stage action for minutes at a time are not, in fact, the thing.