Skip to content
review: after the revolution
theater (reviews)

review: after the revolution 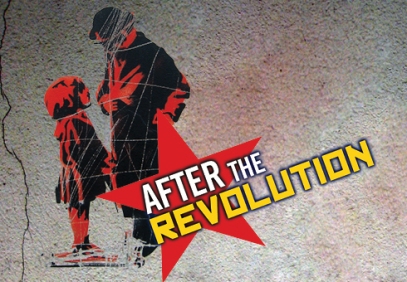 Joseph Cornell box set, framed by natural warmly aged wood, mementoes in wall cubbies upstage, a scrimmed upstage wall that provides panes of color to frame and illuminate and warm, or a dark wall to focus our attention on the words and the interactions downstage, in front, in our lives, before us.  In interior worlds of books and comfortable furniture we meet a family making sense of their own past and their political present in May and June of 1999, in Boston and New York.  Posters on the wall feature Castro and leftist struggles of the past, amidst the books.  And a program note informs us of Mumia Abu-Jamal‘s trial that will inform a strain of this story (a police man killed in Philadelphia, a leftist political movement M.O.V.E, questions of legitimate conviction, Mumia remains on death row still in 2010).  Efficiently and specifically we join a multi-generational world of the Joseph family in the midst of these themes.  We start our theatrical experience with questions and we are left with one, softly repeated, not answered.   This is a taut smart script given a taut, smart production.

Three generations of the Joseph family live with the after effects of post World War II international politics and American response to Communism.  A woman of the Blacklist, Vera (Lois Smith), is the second wife of HUAC-testifying, Communist Party member Joe, who died several years before the action of the play.  Joe’s two middle aged sons from his first marriage who we learn Vera has helped to raise — Ben (Peter Friedman) and older brother Leo (Mark Blum) — live their politics in the Boston area.  Ben is an earnest teacher in Boston area public schools during the busing aftermath, and Leo is a Tufts professor.  Ben’s second wife Mel (Mare Winningham) supports, listens, engages. (All these mothers who abandoned their children!)  Ben’s daughter Emma (Katharine Powell) has just graduated from law school and formed a legal defense fund in honor of her lefty, Blacklisted, and idealized grandfather Joe.  Her project’s primary case is defending Mumia Abu-Jamal — in her mind the parallels in persecution and scapegoating across the generations are powerful and motivating.   Emma’s sister Jess (Meredith Holzman) is recovering from an unnamed drug addiction and visits, now stronger than she’s ever been, out of rehab.  Morty (David Margulies) is a self-described guilty old lefty who has money to offer to the Joe Joseph Fund, and has his own reasons for wanting to assuage old guilt from the times of the Black List.  Emma learns that history is not straightforward, the many people operate within ethical shades of grey, and families are complicated.

This is a story of family shards and motherless children and second marriages and adult children making sense of their own parent’s deeds and misdeeds.  A few questions about plotting did stop my dramaturg’s brain at different moments. Would the sons of Joe Joseph not have seen the text of his 1953 HUAC testimony before they were shown it by Emma in 1999?  Is the Mumia case, laden as it is with race and class politics, really the best choice for Emma’s firm and the proxy representative case of the current generation in this play?

But these questions only indicated for me the extent to which I was engaged in this playwright’s story, these people’s experiences, this play. Despite these plotting quibbles, this is smart story telling with smart actors and laugh lines and a few tears inspired by family pain.