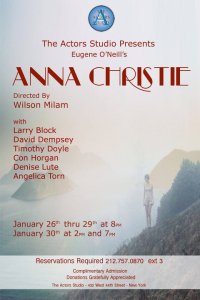 The Actors Studio.  Anna Christie.  Celluloid memories of Greta Garbo and Marie Dressler of 80 years ago collide with in-this-location reports of Marilyn Monroe and Maureen Stapleton of 50 years ago portraying of characters Marthy and Anna.  I am a theatre geek and often awed by little facts like that one.  And this day I settle into my seat in the performance space on the 2nd floor of the historic building at 432 West 42nd Street and am awed by much of this production, and not least of all actors Denise Lute as Marthy and Angelica Torn as Anna, going head to head with these decades-old images of portrayals of two women making do on the New York waterfront in the early 20th century.  These current portrayals reinforce the timeless quality of the characters.  Eugene O’Neill’s story of new immigrants to America in the early 1900s and making do in the face of necessity continues to resonate.

Swedish immigrant Chris Christopherson (a heartbreaking Larry Block) is middle-aged, a sailor in his bones and currently a coal barge captain around New York City.  He is living with wharf rat, no-nonsense Marthy, who quickly moves out to make space when Chris’s long-unseen adult daughter Anna shows up from her life in Minnesota — a life Chris had sent her to years before when his wife died and he wanted to allow Anna to find the American dream inland, safe, off the sea.  Anna arrives, meets Marthy who is instantly totally straightforward with her about her life, the facts of father Chris’s life (not a janitor but a coal barge captain) and Anna is honest with Marthy about her work in a “house” in Minnesota.  From these moments of honest revelation, Anna attempts to make her way back to herself.  Finding clarity and cleansing in the fog of the waterfront, meeting Matt (Con Hogan), the Irish immigrant stoker on her father’s barge who falls for her, and the ensuing struggles concerning how much of her past to reveal and how much of her present to give up to love, to marriage, to either of the two men.

The men argue about who Anna is and whose  property she is, but this Anna stands for herself, throws her own chairs and boxes around, delivers a power punch of a monologue in the third scene on being her own woman.  Torn is so riveting and convincing and 21st century in this speech, in fact, that I found my reaction to her Anna’s chasing after the bellicose Matt at the end of this particular scene almost unconvincing.  Just a matter of overwhelming power of Torn’s acting revealing perhaps a challenge in the early 20th century storyline (woman reaching for man who loves her roughly but he lovers her).  Regardless, oh my goodness.  Torn also finds many laugh lines — her reading of a line describing Matt early in their courtship, full of swagger and sweet innuendo “He ain’t a sailor, he’s a stoker” finds fun and sex in what can be a straightforward descriptive line.  Emphasize “stoker” with a swagger and you begin to feel one of the layers Torn finds in this Anna.

Black boxes and black chairs and black floors and brick walls combine and recombine to create waterfront bar and shipboard and state-room and total believability.