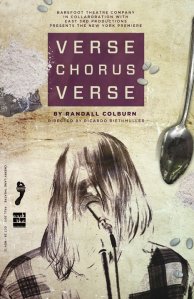 Playwright Randall Colburn has written a play crafted in two time periods, out of his love of a particular musical era, rife with grunge musical references that are out of my personal repertoire but press materials (including the play itself) help me out.  This play is a tribute on the page and ultimately a story of resolution and hope.  While this particular production provides some resonant moments, it is more marked by sex, anger, confusion, and muddle.

A young runaway Polly (Lorraine Rodriquez-Reyes) is held against her will or in a situation without hope by an adult male Gerald Friend (Forbes March), abused sexually and physically (most of this is alluded to rather than illustrated), and this teen grows a 40-year-old who shoots drugs, hangs out with people decades younger, still searching for something.  Among these younger characters are aging musician Terry Krug (Joshua Coomer) who works with Mason (Michael Mallard) who has a theory about the death of Kurt Cobain, and Sez “The Spirit of Grunge” (Singh Birdsong), a musician with no speaking lines.  A young rock journalist Moira (Kristy Powers) is interested in adult Polly’s story for professional and very personal reasons.  And it all unfolds in a bit of a mess, though the single story line between the two women is presented with some clarity.  The music works, the storytelling is jarring and jumbled and the through line for Polly unfixed. I’m not calling for linear story telling so much as clarity in characterization.

Part of the problem comes with the casting and direction of our main character Polly.  We need to believe this character is both 40 and 14 — and this particular actress clearly is a lush woman of an age somewhere in-between and never convinces me of either extreme the script asks her to play.  I also found myself burdened by the director’s choice to have Polly essentially masturbating (or feeling sensual writhing energy) at curtain up, which puts us in a particular position in relation to the story about to unfold. To go from that moment to the image of a shy and shivering and trusting 14-year-old in the first scripted scene is a challenging choice, from which my understanding of the play never quite recovers.  And from my reading of the play script provided to reviewers, this particular initial image is not a choice written by the playwright, who rather specifies the first image of our Polly as “wearing an oversized leather jacket covered in a fashionable flurry of punk rock buttons. She stands alone. Cold. Looking around. Alone.” In this production our Polly has already been sexualized and looks to our mind like an adult woman before the first word is uttered. I find myself in these initial moments asking the same questions I ask throughout the play, spurred by directorial choices (flirting child-woman or aging groupie) played by an actress who seems older than anyone else on stage. Are these the sensual musings of an adolescent or an adult? Are these a woman’s memories and stories or the visions of the men, real and imagined, in her life?

Polly’s character needs to provide the linchpin and through line for the rest of the story.  She seeks, she finds, the other characters provide intriguing color and the performers provide some fine interpretations, yet they are not quite meshed together.  Even Sez, our “Spirit of Grunge” talented musician, wanders on and off stage at different intervals, as if providing a vaudeville act segue rather than informing the proceedings generally, which may have been the playwright’s intent.

The director does make quite effective and efficient use of a very limited playing area and simple scrims and minimal lighting design to craft a range of settings including backstage and on stage at several concerts, in Friend’s home where Polly is held captive (but is she “captive” sitting watching television and sucking lollipops?) and other locales.   Elegance of spare production design (set by Michael Mallard, sound by B. Sidiq Alexander, lights by Eric Nightengale) underscores some of the lack of clarity in other elements of the storytelling.