[A one night only cd-release event is scheduled at Feinstein’s May 6, 2012. This review is of the audio cd only.] 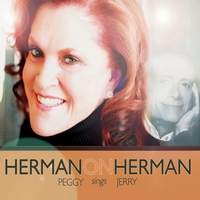 I have a ballad loving, cabaret adoring, musical theatre appreciating heart and mind. I value any long-aborning performance break through story, and that appears to be part of Peggy Herman‘s journey.  Liner notes and research tell me she has performed a range of roles including Bloody Mary and others on regional stages, and has crafted a number of different cabaret acts over the years. And now she’s releasing a CD of Jerry Herman tunes with the assistance of Marilyn Maye and  Tommy Tune and a host of others familiar to me from small and large stages, around New York and around the country. Ms. Herman has many accomplished musical friends. I have a range of reactions to her performances here.

There is an airiness in Ms. Herman’s sound and a rasp around the edges that creates a vocal quality that is a bit stressful for me. But that’s not the end of any singer’s story of course, and I return for additional experiences with each cut on this CD to live with her style for a while.  I can listen to a story told to me by Marianne Faithfull or Mabel Mercer or even Elaine Stritch (now masterfully incorporating recitative into a number of her pieces in a recent Cafe Carlyle show).  In their later years for each of these performers it’s not the vocal quality but the storytelling that we’re after and we receive.  In the recording Herman on Herman, from “It’s Today” to “If He Walked Into My Life” and on through all of the 13 tunes, the feeling for me is: I would love for Peggy Herman to take her big-note impulse down a notch more consistently and get to the core of the emotional line through a subtler approach.

I have highest hopes for Mack & Mabel‘s delicious “I Won’t Send Roses” once I am familiar with the dimensions of Herman’s sound, and those hopes are fundamentally fulfilled. This tune, written primarily for Mack Sennett to deliver to Mabel Normand in his “don’t expect me to be romantic ’cause I’m not that kind of guy” preamble to their relationship and Mabel’s call back of her modified expectations in the story of that musical, I wish for Ms. Herman the strength not to reach for the big notes in the final moments.  “If he calls me and it’s collect / Sir Walter Raleigh I don’t expect / And though I know I may be left out in a limb / so who needs roses that didn’t come from him.”  She makes this tune work, and those final notes, with her vocal rasp, add to the emotional sob of the storyline.

While there are big broad wavering notes in her “The Best of Times / Before the Parade Passes By” medley that shudder and break the through line (especially on the word “parade” more than once), Ms. Herman shines in the quieter and quirky and bouncy delivery of “The Best of Times” phrasings, culminating in believable and infectious laughter.  Oh more of this kind of matching of maturity and tune and arrangement.

Herman’s sound and presentation may be enchanting in person and some day I hope to experience her on stage.  What I hear on this CD is a stunning array of masterful tunes by Jerry Herman that are delivered sometimes movingly and all too often in the same breathy stressed vocal quality, somehow missing the delivery of the story in the attempt to deliver a note.