[Note: these are musings about an experience, not a review of the product. These comments are a kind of conversation with the work and this magical performer, not intended as any kind of review of this work in progress.] 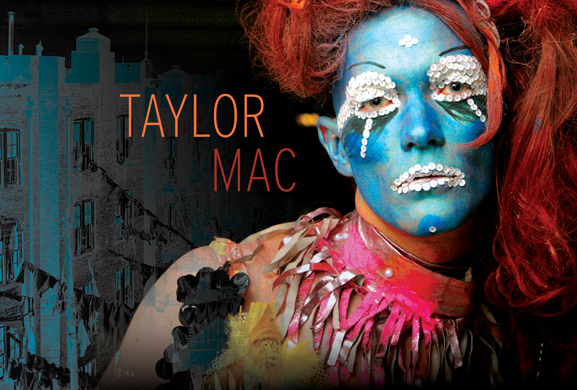 Taylor Mac is bursting with love for all of humanity.  “As a theatre artist, I think of myself as a community organizer,” he tells us.  And by the end of our experience this evening in the basement theatre of the Manhattan Jewish Community Center we have indeed become a community in spirit and in fact, by our choice and by his charm. We are part of his sequential workshops building toward a 24-hour event he envisions will happen sometime late next year — 24 hours to honor the history of American popular song.  One hour for each of the decades of the life of America as a country. This evening, Taylor tells us, is the 7th or 8th such workshop, and tonight we’ll be exploring the music of the New York tenements.  Some tunes written by people who once lived in them; all are tunes, Taylor Mac envisions, that would have been known and sung and enjoyed by the people who lived in the Lower East Side of Manhattan in the years 1900-1909.

Context before content. I first saw Taylor Mac in a performance of his The Young Ladies Of  at the then-new proscenium theatre at the Center on Halsted in Chicago.  The performance was sponsored by About Face Theatre, Taylor Mac’s edgy downtown reputation preceded him. The show was “Jeff recommended” during the time I  was a member of Chicago’s 50-person theatre award conferring Jeff Committee — which meant that opening night judges deemed the show exceptional in some way (could be performance, could be design, could be direction, could be something else) and all the rest of us were required (a happily accepted requirement) to see the “recommended” show during its run. Mac’s artistry was palpable during my performance of this show while he fought against the proscenium nature of the space. I loved his energy and his world view, and I could feel his frustration with his distance from his audience. I’ve heard Taylor Mac speak since about creating art out of life, in particular during a panel discussion at the Public Theatre scheduled within days of the Mike Daisey–Ira Glass This American Life experiences of earlier this year.  I have wanted to see Taylor Mac again on stage for years, and this sweet workshop event this past week is a pleasure and a privilege and an education.

Ira Glass is referenced many times throughout the evening.  Taylor Mac stops himself frequently at the beginning of the evening as he gets into the flow of his storytelling — his cabaret structure, storytelling in song and stories linked by a theme — to remind us of his poetic license.  Mindful of the artist versus journalist debates of a few months ago, Ira Glass briefly is his comic foil. Mac wonders, laughing, if his presentation of the origin of a song or the life story of its writers would pass Ira Glass’s review.  Then he  dismisses that concern. “My fiction is truth and the truth is fiction,” he proclaims, and we go along with him.  In the course of the evening we are treated to tunes by Taylor Mac (in his delightful clear tenor vocal) and his band (piano, string bass, trumpet, guitar) and a visiting klezmer fiddler. Tunes are selected for their prominence during this selected time period: “Everybody’s Doing It,” “Shine on Harvest Moon,” “Wait Till The Sun Shines, Nellie,” “A Bird in a Gilded Cage,” and others enchant, educate, illuminate, entertain.

And the music draws us together. Announced with the statement “there is no observation without participation,” Taylor Mac moves the entire audience from their seats in the audience, in groups of rows (back three rows first, then some minutes later the middle several rows, and finally the first rows in which I am sitting). With his entire audience assembled around him on gym mats, in a single spot light reflecting his bejeweled yarmulke and slinky side curls and sparkly hem and iridescent red lipstick, and his audience’s choreographed shouting and crying on cue as background — Taylor Mac delivers a quiet and heartbreaking version of Irving Berlin‘s “All Alone.”  In Taylor Mac’s world, even when we’re alone, we’re together as a community. And now days later, I hear in my head and now I share with you a quintessential conventional delicious simple painful performance of this same tune recorded January 14, 1964 for Judy Garland‘s 1963-64 CBS television show. Oh my goodness. As she said at the time, “Let’s sing Irving’s song.”