Skip to content
review: barbra back to brooklyn
music

review: barbra back to brooklyn

Barbra Streisand: Back to Brooklyn 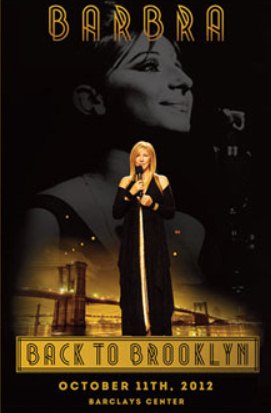 It has taken a few days to get my mind around the experience of seeing Ms. Streisand this past week at the first of her two concerts at Barclays Center, Brooklyn’s spanking new massive 19,000 seat sports arena. After five decades of Streisand fandom, this is my second visit to her in concert in the past six years. I paid much more for seats on the floor of Chicago’s United Center in 2006, and this year I pay a fraction of that ticket price to check out the rafters in Brooklyn’s newest venue.

The timing of each concert happens to coincide with national political events of interest. It was midterm election night in 2006, the night the Democrats took back the House — a fact I discovered as I walked out of the venue and turned on my phone to receive texts with that happy news. This Presidential election year’s concert coincides with the Vice Presidential debate, and texts relaying my partisan husband’s positive assessment of Biden’s performance entertain me as I and my concert companions made our way out of the arena. Politics and Barbra appreciation go hand-in-hand for me. With ups and downs in both areas, in both arenas, in both concerts-with-occasional-political-commentary — I remain an agog fan, delighting in the smooth, expert, comfortable, resolute, emotional, conversational, delectable performances of Barbara. Sure, at times I could use a lot less of some of her guest stars, but with each of her returns to the stage I love her even more. If that were possible.

In 2006 I mused on the styles of Streisand and Judy Garland, two twining legacies that in fact came into contact several times during their lives (and are referenced in this 2012 concert on screen if not in song), and enthused about the comfort I could see in Streisand. Many of these 2006 words apply to my sense of Streisand in concert six years later.  In 2012 Barbra keeps her shoes on, but otherwise my observations pertain. In 2006 I wrote:

A fellow Judy fan described her voice … as “power on the verge of control”. Today, Barbra seemed more human in performance and, to me, more moving than she has been in recorded form. She did Judy’s shtick of removing her shoes (Judy did this, famously, during her record-breaking run at the Palace in New York City in 1951 and 1952). She sat on the stage steps – not the apron (no Barbara doesn’t feel that close to her audience — respect and distance is her style). And her voice was not pristine. It shows her age in a delightful way. Rich and sometimes a little craggy at the edges. Perhaps now entering Judy’s world of “power on the edge of control.” Beautiful.

Favorite quotes of the evening.

Favorite non-musical moments of the evening.

And now we come to this year’s version of 2006’s Il Divo. 2012’s young trio of Italian tenors called Il Volo (each of them under 20!) join Barbra on a warm and wonderful version of “Smile” and then continue for over-long pieces of their own in Italian. (Barbra, can you hear us? Come back!)  Though I did enjoy her banter with the boys — “You could add your ages together and not equal mine,” she quipped.

Encores followed after Barbra made jokes at the expense of audience members she could see leaving to get to their cars — it was now nearing 11pm.  Noted Barbra: “It ain’t over until the fat lady sings and I ain’t that fat.”

I and my companions are a bit drained from absorbing the energy of Barbra, the energy of her fans, and the volume of the Barclays Center. Rough and right on the mark, quiet and raucous, contemplative and provocative — all of these things at once. As performer, as entertainer, and as a person, Barbra in concert is not to be missed.