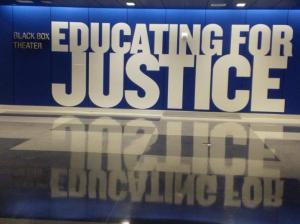 Events on the first of three symposium days in a delightful black box theatre in a shiny new campus building just minutes from my home provide a near perfect blend of prior and current professional lives. As a court researcher for many years I observed the theatre of courts and researched the judges, attorneys, advocates and others who worked on and off that stage. In recent years I spend much more time in audiences (and sometimes rehearsal rooms and administrative offices) enjoying the process and product of theatre more conventionally understood. What faculty and invited guests highlight in this symposium at the John Jay College of Criminal Justice is the overt link between politics and theatre in the lives of performers and in the choices they make about the projects in which they get involved. First up: Kathleen Chalfant in a conversation with professor and playwright Karen Malpede on the topic “Making the Link Between Performance and Advocacy.”

Chalfant embodies what she calls “political performance” — in the work she chooses, in her political private life, in how she sees our obligations as human beings on this planet and in civil society. A product of northern California and the campus at Stanford in the 1960s, she observes that she came up at a time when performance and demonstrations and politics were inseparable. She notes: “Performance is by its nature a political act, an act of public expression.” And our hearts and minds are open.

On the politics in the strong roles she has elected to play over the years. “I’ve had the luxury of being able to choose. But its wicked not to help.”

On her role in the potent off-Broadway play focusing on abuses by American soldiers at Abu Ghraib Guantanamo: Honor Bound to Defend Freedom. “I forced them to let me be in it.”  In the British production the themes and audience response were “galvanizing” and led to political action. In the initial American production (and she was in both) the audience reaction was more “devastation … we were the bad guys.”

On the political and communal nature of theatrical art.“The theater is an inherently political act. The subject of it. It is by its nature a communal act that produces a thing” that doesn’t exist until it’s shared and there is a communing around it. “It doesn’t exist until someone sees it. … The theatre as an activity, the making of a play, is a perfect paradigm of a just society” encompassing community will and reflecting “acts of generosity with a place in the community for every single person.”

Chalfant is a veteran of big Broadway shows (Angels in America as Hannah Pitt and all that doubling, and Wit and others) and many off Broadway shows that move her politics and her heart. For her it’s all of a piece. “Art is paradoxically both safe and dangerous.” She seeks the danger and the message and the community. What an inspiration.