There is nothing quite like paying homage to the centerpiece of a museum’s art collection. This past week I visited a museum first time that led me to muse about the horrors of wars and the transcendence of artistic expression. And through these visits and these memories, I stood for a moment at the epicenter of the collection, feeling the heartbeat of an organization.

I’ve felt this sensation many times.

The Mona Lisa at the Louvre, the Diego Rivera murals commemorating the horrors and majesties of the River Rouge automobile plant at the Detroit Institute of Arts — many museums around the world have core items for which they are best known and that sometimes provide emotional color to the entire enterprise. While I lived in Chicago, I frequently visited The Art Institute and each visit, for just a moment or for extended periods I have kept company with Georges Seurat’s A Sunday on Grande Jatte. On extended visits, because I’m a geek this way, I sometimes listen on my mp3 player to “Sunday” from the end of the first act of Sunday in the Park with George while pondering the nuances of the painting, guided by Sondheim’s lyrical musings. The crowds by this particular painting are almost always intense yet almost always move through quickly. People want to tick off the visit to this out-sized pointillist masterpiece on their world tours. Some of us linger in our visits — sometimes for minutes and sometimes for hours. 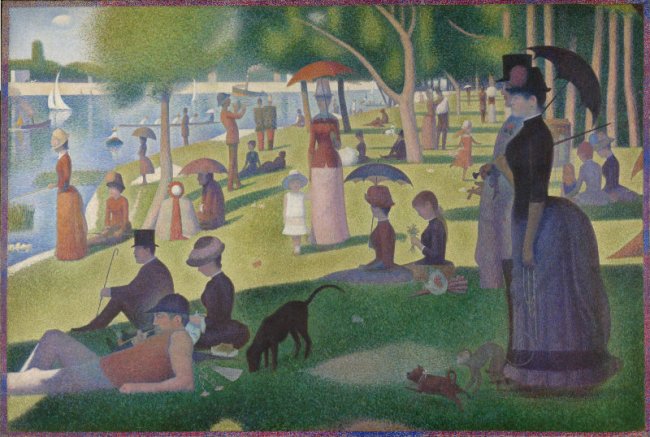 As a frequent visitor to New York City as a young woman, I would visit many locales on each visit — Pablo Picasso’s Guernica, for example, when it lived at MOMA prior to its return to Spain in 1981.

MOMA now is often a stop on my midtown rambles, and my membership makes it a kind of art “club” for quietude, musings, food and other necessities of life. Or the Jo Davidson statue of Gertrude Stein in Bryant Park, behind the Public Library.  When I was a frequent visitor to the City, I’d always include a pass by her wise pose. Now that I’m a resident, I see her less often but I’m comforted by the knowledge that she’s there. Works of arts that provide focus for a walk, ballast to a park landscape, a heart to a museum collection.

On my first visit to the Neue Galerie about a week ago (don’t judge, I know I’m tardy in this visit to a museum that has been open since 2001), I  first wandered through the fabulous visiting Degenerate Art exhibit. The collection in general “covers a range of media, including painting, sculpture, works on paper, decorative arts, and photographs created in Austria and Germany between 1890 and 1940.” And then I found it, the heart of the collection, one of the treasures — Gustav Klimt’s Adele Bloch-Bauer I (1907), seized by Nazis, held by the national authorities, finally reclaimed by heirs of the original owners, and purchased by the Galerie in 2006.

Standing before the piece, amidst other works by Klimt and Klee, you feel love, a lost era, and many mysteries. A musician and musical-writing friend Cheryl Coons has, in fact, been long developing a musical The Kiss inspired by this painting and the lives it has touched. A reading of its current incarnation will take later this week at Chicago Dramatists. Heartbeats and inspiration.

The Neue had additional gifts for me this visit. New arts works to bemuse and entrance, and one that led me down another thematic visual leaps and associations. Paul Klee has been a favorite for many years in many forms, and the Neue has a healthy collection of his art works. One stopped me in my tracks is crafted of water color and printing ink and gouache, eerie and suggestive, a nightmare image of a room, a chamber, with hints at perspective lines and suggestions of solidity. Paul Klee, Ghost Chamber with the Tall Door (New Version), 1925.

Paul Klee. Ghost Chamber with the Tall Door (New Version), 1925. On display at the Neue Galerie.

Another artist came immediately to mind for me, in a rush upon this viewing — an artist whose work I spent much of 2013 visiting and recording in the Billy Rose Archives at the New York Public Library of the Performing Arts. As I developed a Monograph on Boris Aronson for issue 2 of Chance Magazine (fall 2013), I explored the full expanse of his many decades of work. Some images I greatly love didn’t end up in our magazine photographic spreads — I captured some of them, and the experience of our formal photo shoot at the Library. I learned while leafing through a lifetime of theatre design in these archives that designer Aronson responded often first as a fine artist in a wide range of styles while developing ideas for a production. In the boxes holding the archive’s ephemera reflectingdesign work on Fiddler on the Roof (1964), a particular Aronson sketch in pencil, ink and watercolor I photographed shared visual and emotional themes with Klee’s art work. The spectral perspective lines, the ghostly room, the nightmarish impact.

Hearts of collections, artistic explorations, artistic inspiration, chance associations. All of a piece. Is the lesson to always make a museum a home or to find the heart of any institution and feel its power? At root, the message might be to keep one’s heart open, and sketchbook close at hand to record the connections through history. Seurat to Picasso to Davidson to Klimt to Coons to Klee to Aronson to whatever and whoever stands around the next corner.