Over the past two years, I have collaborated with colleague Judith Binus at the League of Professional Theatre Women on a data project that joins a family of similar projects […] 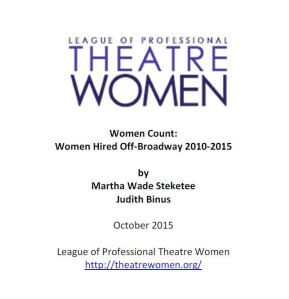 Over the past two years, I have collaborated with colleague Judith Binus at the League of Professional Theatre Women on a data project that joins a family of similar projects across the United States and elsewhere tracking the status of women in theater. With continuing regional data collection efforts from Washington DC to New England to Los Angeles and other locations in between, and national data collection projects like the Dramatists Guild and Lilly Award collaboration The Count, researchers are assembling data to move us all beyond the occasional anecdote and toward action.

The Count national results include 2508 productions from 1486 unique authors in 153 theatres across the country over three seasons (2011-2012 through 2013-2014), and find 22% of productions are by women playwrights. Advocacy efforts on behalf of playwrights has taken many forms, including the efforts of the Kilroys annual lists of work by women writers (46 in 2014 and 53 in 2015) that are recommended by playwrights, dramaturgs and artistic directors across the country.

My colleague Judy Binus and I wondered: how many playwrights, how many directors, how many designers and other professionals off Broadway are men, are women, are of non-binary sexual identification? Broadway playwright counts are frequently published and are relatively straightforward to assemble from on-line sources but what about the rest of the story?

Playwright Laura Shamas outlined in a recent HowlRound essay her unsuccessful efforts to locate consistently collected numbers on women playwrights. “In 2013, I tried to get accurate figures about women playwrights working in New York, at levels other than Broadway. I was unable to find this information, because no organization was funded to count it.” Shamas issued a call to action. “Is there really no institution in 2014 that will sponsor an ongoing annual study of American women playwrights working in theater seasons around the country (and directors, producers, designers, for that matter)?”

The League of Professional Theatre Women (LPTW) has stepped up to meet this challenge to count playwrights – and directors, producers, designers and others – at some of the Off-Broadway venues for which statistics have been elusive. LPTW Board member Judith Binus, a veteran stage manager, began in 2013 to collect data on basic personnel for a number of Off-Broadway theatres beginning with the 2010-2011 season. Fellow LPTW member Martha Wade Steketee – dramaturg, critic, researcher and editor – joined Binus some months into the project, assisted with expanding the number of companies and productions covered, led the analyses and took on report writing duties.

The Women Count project asks: How are women faring in theatrical professions (other than the actors on the stage) on New York City stages other than the 45 or so Broadway theaters? The Women Count 2015 report analyzes employment for 13 professional roles in 455 Off- and Off-Off-Broadway productions by 22 theatre companies in five complete seasons, 2010-2011 through 2014-2015. The report includes summary tables, often with theatre-by-theatre details, that provide gender breakdowns in hiring to show who works in our theatres in a wide range of roles.

Some of the basic 2015 report findings include:

We published our findings this year accompanied by some nifty coverage in the New York Times, Playbill, Broadway World, and a piece in IndieWire that looks at both The Count and our 2015 Women Count reports.