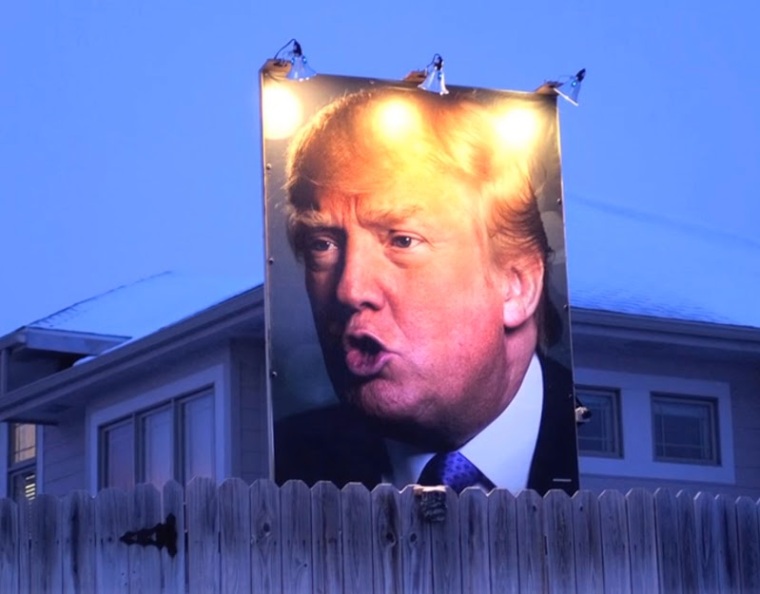 Donald Trump’s face is everywhere these days. In Mike Daisey’s newest monologue The Trump Card, playing at FringeArts and soon at Joe’s Pub in New York, history, rather than image, is onstage. As commentary and analysis, the show is terrifying. As art, it has its challenges.

The Trump Card is Daisey’s latest in a line of unadorned monologues. with no projections and no set pieces, it’s just Daisey at a table with notes on yellow legal paper, a big glass of water, and lights up. He’s a proxy everyman and traveling journalist; words are his weapons and word pictures are his art form.

I have seen several of Daisey’s productions on a range of topics over the years in several cities. I also attended the Public Theater’s final March, 2012 performance of The Agony and the Ecstasy of Steve Jobs. Two days earlier, in an interview with This American Life host Ira Glass, Daisey admitted he embellished his research at Chinese Apple factories, and the show was forced to retract its story. The result was many discussions in theater circles on art, journalism, and how they should or should not intersect.

Daisey reflects on being bullied as a fat kid (fat shaming is revisited several times in this presentation, a way for him to rope us into empathy) and learns about bigotry at the knees of his beloved racist grandfather (a story which sets up his musings on the effects of Trump’s father’s own deeply racist views and their effects on the son). These details connect him to the subject of his story, but are overused. There are too many references to fat shaming, and references to his bigoted grandfather could be trimmed to guide us into an understanding of Trump’s upbringing.

For this piece, Daisey’s primary dramatic frames come from Trump’s relationship to Roy Cohn late in Cohn’s life (during which we hear too much about how difficult it is for Daisey to describe him post-Tony Kushner’s exquisite Angels in America), and a failed Milton Bradley game called Trump the Game.

The bully and the bullied

So the bullied fat kid from Maine with a racist grandfather bookends his 100-minute musing on Trump, the phenomenon, with a rousing round of Trump the Game, a Monopoly ripoff. Blending research, aggravation, digs at and warnings to the audience (“You, my friends, are fucked”) Daisey spins a web of interrelated images, callbacks, laugh lines, and zingers that dig deep because, let’s face it, the stakes are so darn high.

Daisey says he was inspired to research The Trump Card after he received a vintage box of the board game as a gift. At the time, he was amused, because, he says, “It was not so Kristallnacht then.” I saw this monologue before the Republican National Convention began in Cleveland. Anyone experiencing it from now on will know that Trump became a major party’s presidential nominee, and that makes Daisey’s show all the more frightening.