I’m usually a sucker for a play staged in a bare black box with crisp white lights and an occasional projection, all to focus on the words of the playwright. The major challenge with BirdLand Theatre‘s production of Conor McPherson‘s The Birds inspired by Daphne du Maurier‘s short story by the same name: it gives me all the elements I usually love (59E59’s sparest space set up in the round with minimal set pieces by Konstantin Roth, simple lighting by Kia Rogers with projections on one wall by David J. Palmer) and staging sufficiently immersive that every word from each actor is perfectly audible — yet all these elements manage to underscore the weaknesses of text and design.

I know the 1963 movie directed by Alfred Hitchcock rather than the original short story published in 1952 by du Maurier, but quick research gives me the original’s outlines: a British farmer and assembled others, stuck alone in their farmhouse, are besieged by rampaging birds of many species. The kicker, you see, is that the creatures we know as gentle and friendly have turned on human beings with no explanation, and the apocalypse is at hand.

The Birds 1963 movie version expands the original story to include a romance and adventure (scenes in boats and cars speeding on country roads and explosions seen from the air) in northern California: heiress meets cute a  well-to-do man in San Francisco, who soon leaves for a weekend visit with his well-to-do mother and younger sister (what was the deal with that sister young enough to be his daughter?), and heiress decides to go visit uninvited, and it all turns into the beginning of the next phase of their lives. In the fishing village where the balance of the movie takes place, we encounter locals and old flames, a harbinger of doom and a bird expert who informs us that the millions of birds on earth vastly outnumber humans (don’t get complacent, people) and Hollywood-style romance blooms (with Tippi Hedren in a smashing Edith Head suit with heels), while the birds gather around the edges. Scenes created for the film include scenes in a village (attacks and explosions by a gas pump) and in a school yard (kids chased down the lane as they try to get home) and a farmer found with his eyes pecked out. 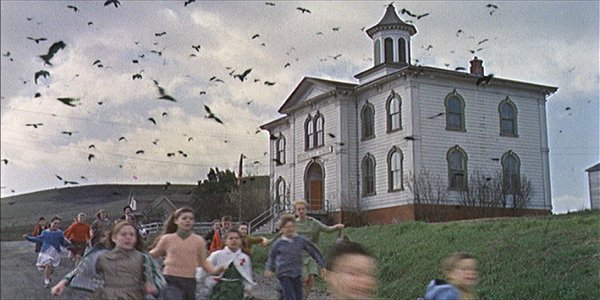 With new knowledge of the original story, I now understand why one particular less famous scene has always most haunted me and may be the most successful horror sequence in the film. The resonance may derive from the fact that this one scene, inside the small town house, provides a setting and resonance closest to du Maurier’s original vision. One evening, mid film, the extended movie family (mother, adult son, young daughter, and visiting ingenue) are locked in and the house is attacked by swarming and screeching gulls and smaller birds.

We the audience are in the house with the family, hearing the swarming birds growing louder and louder, a few drop down the chimney, some begin pecking at the doors and windows, and we feel along with the humans in that room — with sound, in our own imaginations. The rush to board windows, nail furniture before doors, accompanied to the unidentifiable thumps and flaps in the night sky outdoors. Fear is most palpable when only beaks pecking through wood are visible or even just the sound alone, rather than bird bodies, however terrified or swarming they are. Terror on film in the imagining.

Conor McPherson in his stage adaptation has returned to source materials and fashioned his own story with the basic ingredients. After being instructed to turn off our cell phones and prepare for the Apocalypse (yes, they name it before we even begin), lights out and we’re in a single house — which again we can’t just imagine but it is literally spelled out for us when one character, before we know who she is, draws with chalk a box on the floor and the word HOUSE.

Diane (Antoinette LaVecchia) and Nat (Tony Naumovski) have set up camp in an abandoned dwelling. Scavenged food, Nat’s revealed mental disturbances, loss of family and friends and possessions slowly are revealed. Enter into the tentative two person family (mother-son or mother-child or simply dependent friends) a younger woman Julia (Mia Hutchinson-Shaw), a bit wild, as a third member. The tentative frame for this survivalist world is tested when Julia obtains provisions from somewhere (she can’t remember where once she returns) and may or may not have been made pregnant by someone. McPherson adds human violence into the mix of the story: physical harm of one character by another, unlike the film adaptation where danger came exclusively from the animal world. Taking to a microphone (the now very stylized and perhaps outdated presentational directorial trope), our “matriarch” Diane narrates sections of the action, asking “Is this happening everywhere” at the top of the show and we wonder about limits to our actions in a terrorized and survivalist world.

Literal doesn’t help this production and it hems in on all sides. Whenever the designers get concrete (actually glasses of water or sleeping bags or cans of food) the focus gets murky, distracting us from the monstrous realities outside the farmhouse walls. This would play best as simple a show in dim light with spare movement. David J. Palmer‘s video images occasionally evoke wings or trees or other sketched environments, but are limited to one theater wall and draw focus rather than immerse us in the terror of the story. And most problematic, this script takes us to human failings rather than external threats, and we lose track of the birds other than the sound of their beating wings. This should be a ghost story made visceral.